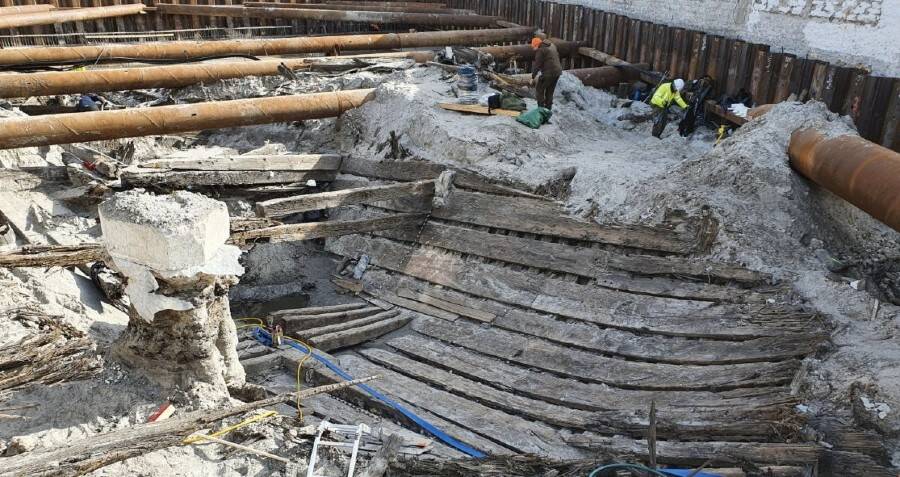 Archeologists estimate that the 700-year-old ship was likely a cargo vessel and part of the Hanseatic League trading network. 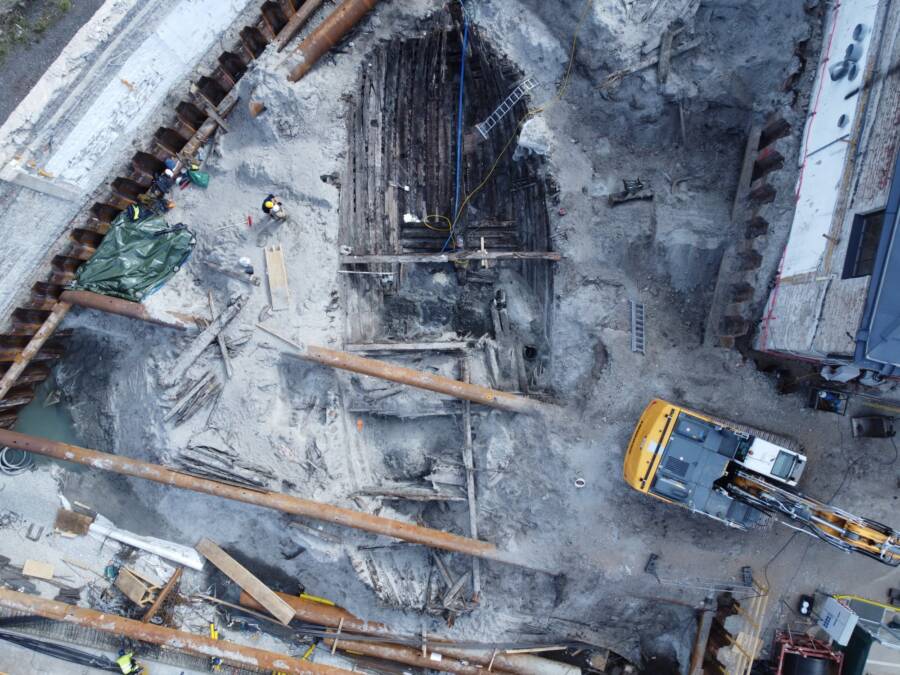 Silver Jäger/FacebookA view of the cargo ship from above.

When construction began at Tallinn’s Old Harbor in Estonia, archaeologist Mihkel Tammet was sent to observe the work. Under his supervision, construction workers unexpectedly discovered a 700-year-old cargo ship that may have belonged to a medieval trading network called the Hanseatic League.

“For Tallinn as an old merchant town, finding something like this is an archaeological jackpot,” Priit Lätti, a researcher at the Estonian Maritime Museum, told Live Science.

The ship was discovered about five feet underground and, according to archaeologists, is in fairly good condition.

“The ship is 24 meters (78 feet) long and nine meters (29 feet) wide,” Tammet said, according to The Daily Mail. “The boards are intact up to three meters from the bottom of the ship.”

Back then, Tammet told The Daily Mail, the configuration of Tallinn’s harbor was very different.

“This area was still under the sea in the 18th century,” he explained. “Eight hundred years ago we had almost two meters of water here.”

At that point in history, archaeologists suspect, a ship like this may have belonged to a powerful European trading network called the Hanseatic League. It was probably a cargo ship — though archaeologists are hesitant to draw concrete conclusions as excavations continue. 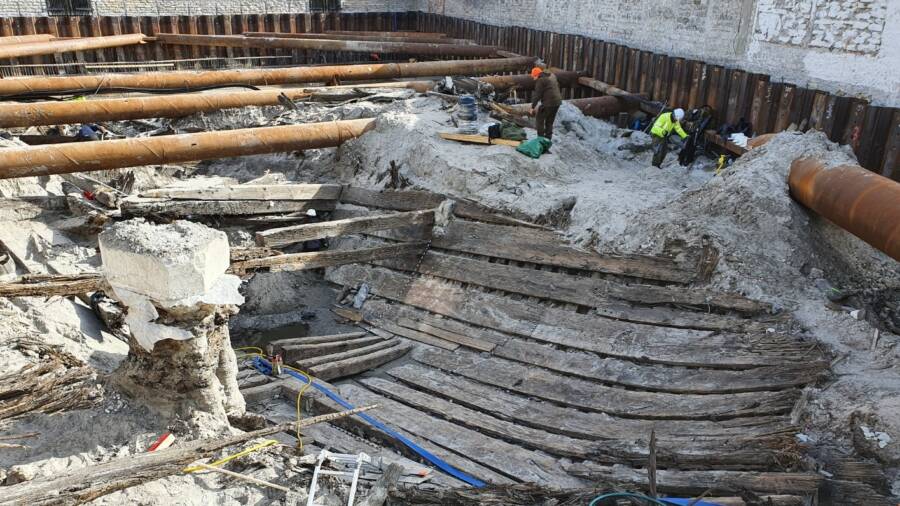 If the ship was a part of the Hanseatic League, then it played a crucial role in European history. The trading alliance reached its peak between the 13th and 15th centuries and extended as far as England and Russia. According to The Daily Mail, the trading alliance swapped goods like furs, wax, grain, fish, flax, hemp, timber, pitch, tar, potatoes, cloths, metal goods, weapons, and spices.

Until 1962, however, historians only had drawings of Hanseatic vessels. Then, archaeologists came across a Hanseatic cog in Bremen, Germany, which they suspect sank during construction. But the Tallinn ship is in much better condition and was likely seaworthy. 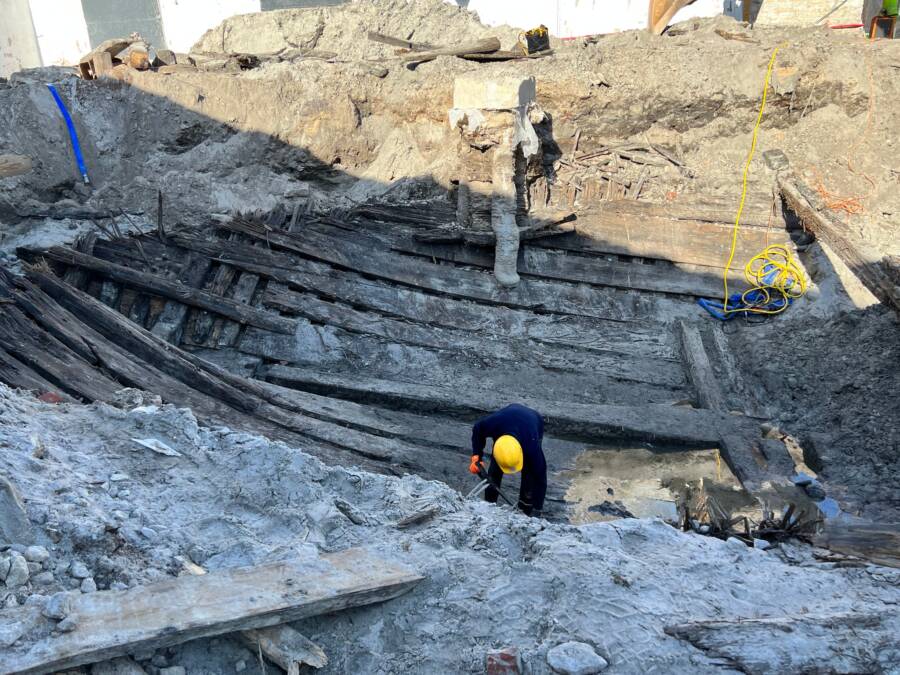 Eerik N Kross/FacebookExcavating and preserving the ship will likely be a Herculean effort.

For now, excavation efforts continue. Lätti told Live Science that he hopes the recovery of more artifacts within the ship will help give archaeologists a better idea of its origin and history.

“[T]he artifacts found aboard must be analyzed to give more exact answers,” he said. “At the moment, only the bow area of the ship is excavated; the cargo hold was relatively empty. Now the excavations move to the aft area of the ship, which may contain more finds.”

So far, archaeologists have recovered a number of artifacts including wooden barrels, pottery, animal bones, leather objects, and textiles. They’ll continue to search the ship for more — and will also begin thinking about how to move and preserve the vessel.

“The wreck will be removed from its current position to allow the construction work to continue,” Ragnar Nurk, Tallinn city government archaeologist told The Daily Mail. “There are two main options currently: it will go to the maritime museum or to the wreck preservation area in Tallinn Bay near Naissaar Island.”

He added: “Unfortunately, the size and restricted conditions of construction do not let us to move the ship away in one part.”

Indeed, Lätti described the work ahead as a “huge task.”

“The methods of transporting, preserving, and conserving the ship are still discussed,” he said, “because it is a very complex operation, and we are dealing with a very valuable archaeological object.”

The ship’s future aside, its past certainly represents a historic treasure. Eerik N. Kross, a deputy of the Estonian Parliament, described the discovery in glowing terms. On Facebook, he wrote:

After reading about the medieval ship discovered in Estonia, see how archeologists discovered Viking ship burials in Denmark. Or, look through these weird medieval foods that once filled peoples’ plates. 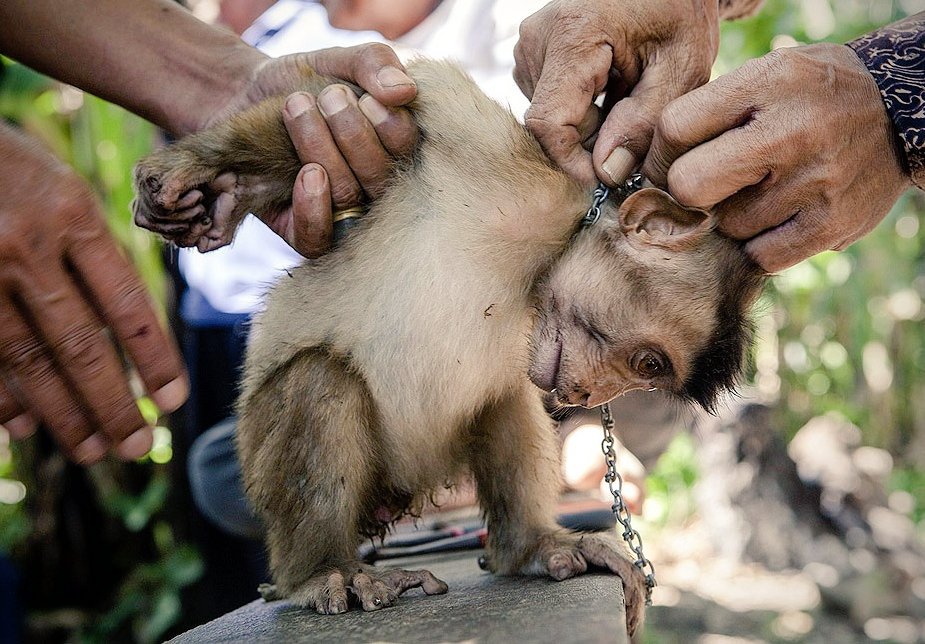