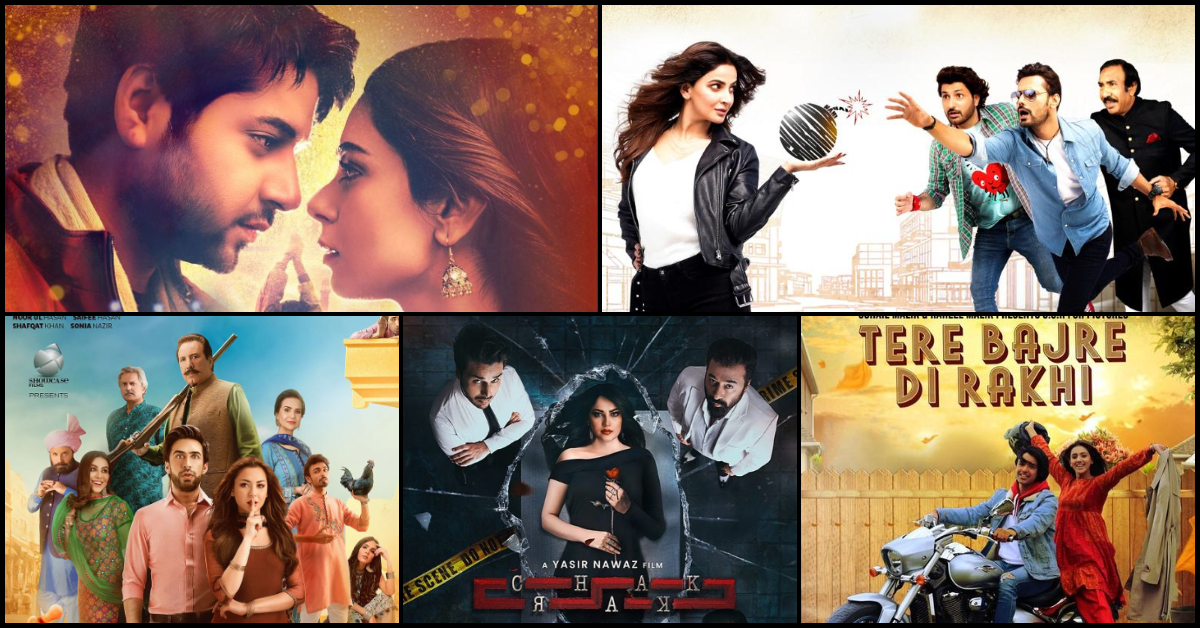 With Eid ul Fitr just around the corner, local cinemas have opened advance bookings for Pakistani films. The anticipation is high because cinemas will be bustling with crowds after a long break. Now is the best time to get your tickets because we think it’ll be hard to get seats later.

Why? Because Pakistani filmmakers are delivering entertaining family content this festive season. We have five local releases, helmed by renowned directors with some of our most beloved Pakistani stars. There will be debut performances, new genres, fresh concepts and a lot of music and comedy.

Something Haute is giving you a rundown of movies that will hit the cinemas this Eid ul Fitr, along with their strengths and weaknesses to help you make a wise decision of which order to watch them in.

Imran Ashraf and Amar Khan will be making their cinematic debuts with Dum Mastam, a romantic comedy based in the inner city of Lahore.

Written by the leading lady Amar Khan and directed by Ehteshamuddin, the film is a dramatic and vibrant commentary on artistic aspirations, setbacks, jealousy, the chaos of love and how it translates into much more.

Imran Ashraf is playing roadside Romeo and action hero as Bao, while Amar as Alia is is a free-spirited girl who is not interested in trappings of love. She aspires to become a star performer. However, it appears that fate will make Bao a singing sensation. 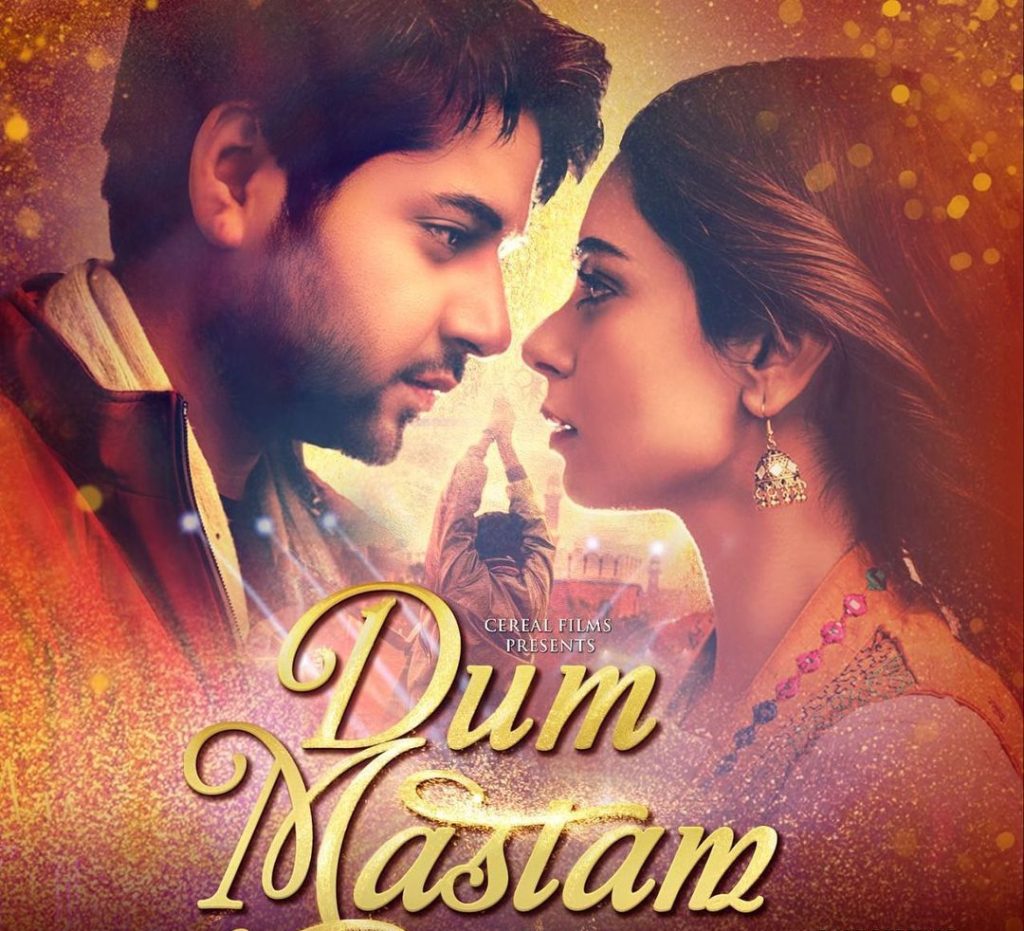 What works for it: While Adnan Siddiqui (producer), Ehteshamuddin and Amar Khan are all hugely invested in the film, one feels it rides on Imran Ashraf’s shoulders and his fanfare will play a major part in its success. Moreover, the film is full of colourful imagery, romance, drama, energetic dance numbers and Punjabi humour that will make your Eid filled with love and laughter. It’s a musical, hence the soundtrack should be good and what we’ve heard of it, so far, does leave us with something to look forward to.

What we’re worried about: Being Imran and Amar’s first film, the two TV stars will need to have strong big screen presence and charisma to build a crackling chemistry. Will they be able to deliver?

With Ahsan Khan, Neelum Muneer Khan, and Yasir Nawaz in the lead, Chakkar is a murder-mystery and thriller which is “shocking and intriguing” as claimed by its trailer. The film is written by Yasir, Zaffer Imran and Syed Jibran.

This is going to be Yasir’s fourth film as a director and this time he’s exploring a new genre. Neelum has double roles in the film: she is playing Mehreen, who is Kabir’s wife, as well as her identical sister Zara Khan who is a superstar. Zara is infamous for being a diva who is difficult to work with and Kabir (Ahsan) is not fond of his sister-in-law as well. But one fateful day, Zara requests her sister to switch places with her and someone murders her. Inspector Shahzad (Yasir) is investigating the murder. 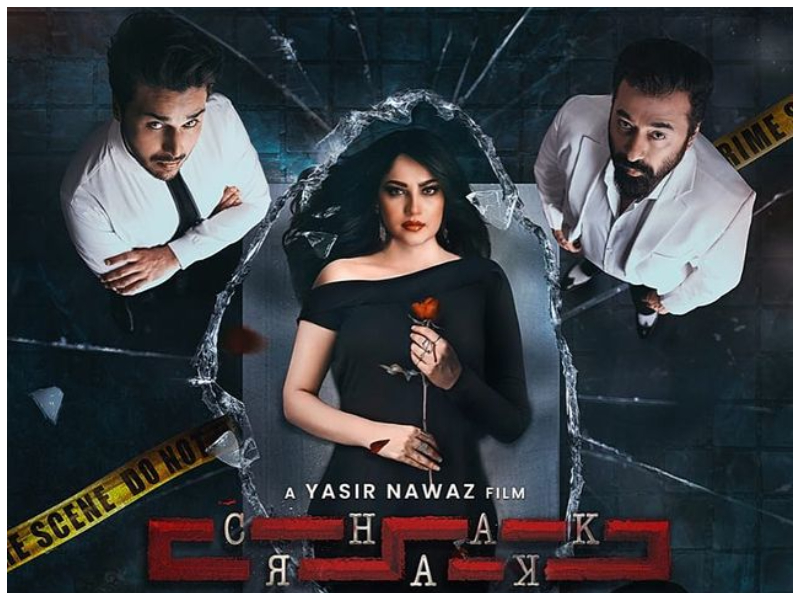 What works for it: In the sea of romantic-comedies that we’re accustomed to watching in Pakistan, Chakkar is a whodunit which has dance numbers, action sequences, romantic ballads at picturesque locations, a lot of punches and slaps, suspense and drama. It sounds like the perfect popcorn entertainer.

What we’re worried about: We sincerely hope that a tightly-knit murder mystery lies at the core of all this masala and it doesn’t end up a mess.

Produced by Nida Yasir and Yasir Nawaz for Farid Nawaz Production, the film is distributed by Eveready Pictures.

Ali Rehman Khan and Hania Aamir are playing the lead couple in Wajahat Rauf’s upcoming film, Parde Mein Rehne Do. Wajahat has steered away from his regular rom-coms and has tried the genre of social commentary fused with romance and comedy this time.

With Mohsin Ali as the writer, the film promises to be a nuanced depiction of a serious medical condition i.e. infertility. However, it is yet to be seen who will turn to be infertile: the wife or the husband. The film completely breaks the stereotypical depiction of Alpha males, as the leading hero here is weighed down by societal pressures. The portrayal is comical, lighthearted yet it touches upon genuine and relatable problems of our society.

Read: Team of Parde Mein Rehne Do reveals why should people watch the film on Eid ul Fitr 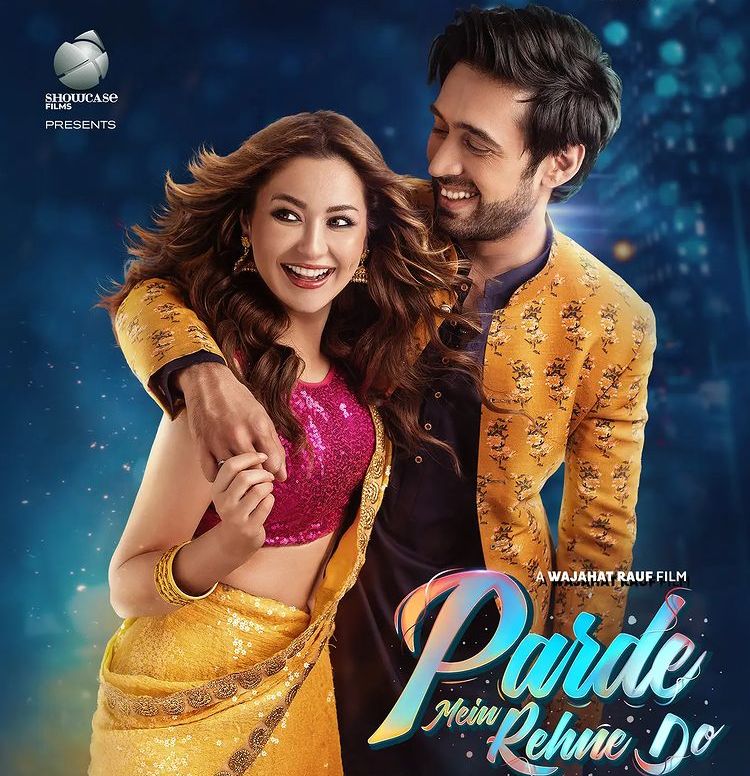 What works for it: The subject of infertility is novel for Pakistani audience. Curiosity about how the writer/ director have dealt with the sensitive topic as well as how Hania and Ali have performed the raw emotions of a regular couple can add to its appeal. That said, Hania has a huge fan following that will surely buy tickets to watch her. Moreover, the OST is something to look forward to.

What we’re worried about: The subject is a doubled-edged sword as many may not feel comfortable watching it along with their families.

After spreading their magic on television, Zahid Ahmed and Saba Qamar have teamed up to set big screen on fire with their chemistry in Ghabrana Nahi Hai. The film marks the big screen debut for both Zahid and Syed Jibran.

Ghabrana Nahi Hai revolves around a troubled family, a goon and corrupt policemen. Saba’s character is trying to get back the ownership of her father’s land, while Zahid is playing a cop, Sikander, who is pretending to help her but he is also in cahoots with the land grabbers. Jibran is playing a lover boy. 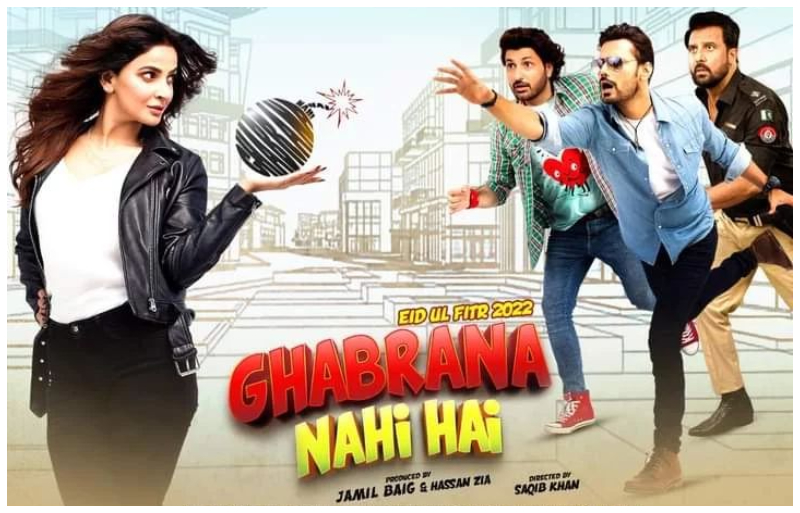 What works for it: Saba Qamar and Zahid Ahmed’s jori is already a hit and the lead cast are coming up with a light-hearted comedy. The movie has elements of drama, action, comedy, romance, thrill, and together with a very relatable subject, it is going to be an entertaining watch on Eid.

What we’re worried about: Saba, Zahid and Jibran, who have earned a reputation as established TV actors, are trying their hands at comedy that may backfire if not well written and well executed.

Jamil Baig and Hassan Zia have produced the film under the banner of JB Films. It is directed by Saqib Khan, while the story is by Hassan Zia, Saqib Khan and Mohsin Ali. It is distributed by JB Films, Geo Films and Mastermind Films.

Marking the debut of TikToker Jannat Mirza and new face Abdullah Khan along with Saima Noor and Babar Ali, Tere Bajre Di Rakhi is veteran director Syed Noor’s comeback film. It is a romantic epic set in the countryside of Punjab with vengeance, drama, action and loads of comedy.

The trailer of the film explores local culture and is shot beautifully. The direction and cinematography reminds us of Noor’s mega hits but this time it is on a larger canvas. The story revolves around a dacoit (Babar Ali) who falls in love with Saima Noor’s character and leaves her with a young child, who grows up to become Jannat Mirza. It looks like a Romeo-Juliet situation where lovers will be torn apart because of age-old vendetta between two families. 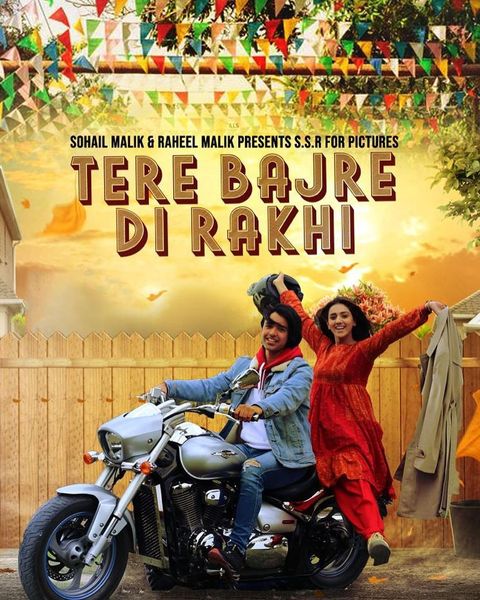 What works for it: Tere Bajre Di Rakhi is a nostalgic treat for those who miss quintessential Punjabi films with shots of sarsoun ke khet, romantic music, and lots of filmi action and bloodshed. It boasts of veterans like Naghma Begham, Mustafa Qureshi, Amir Qureshi, Iftikhar Thakur and Irfan Khoosat.

What we’re worried about: This one has pure Punjabi dialogue with thick accents and is made for a segment that is well versed with the language and culture. It may not appeal to the non-Punjabi audience.

The film is produced by M. Safdar Malik, co-produced by Sohail Malik and Raheel Malik. It is written and directed by Syed Noor and distributed by the IMGC group.

Which film are you most excited about? 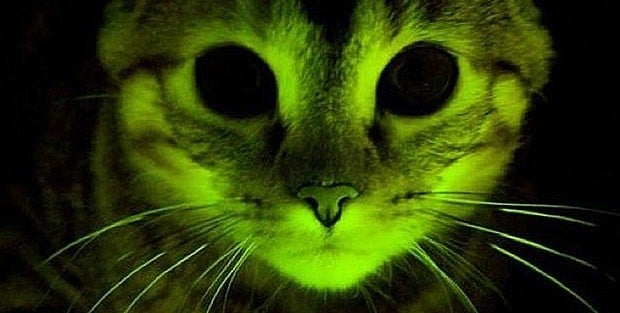 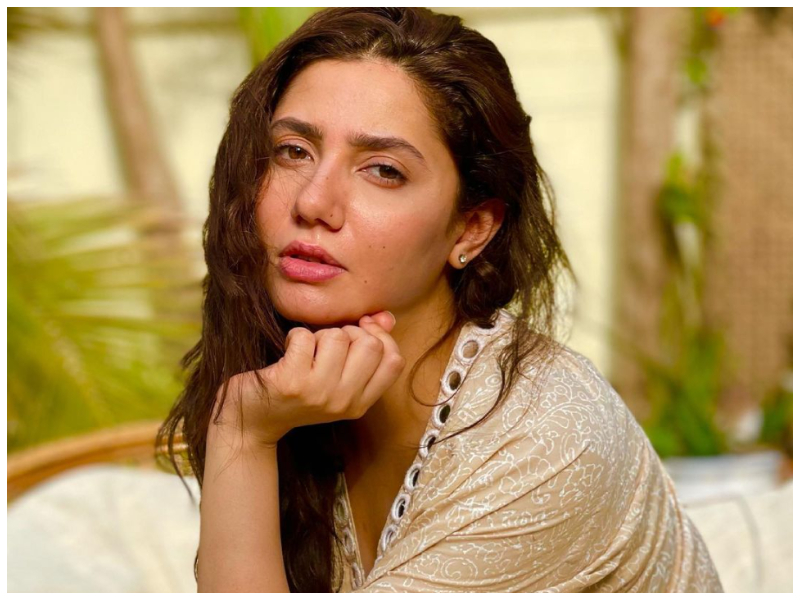